Home   Where we work   Life in a Nepali village

Life in a Nepali village 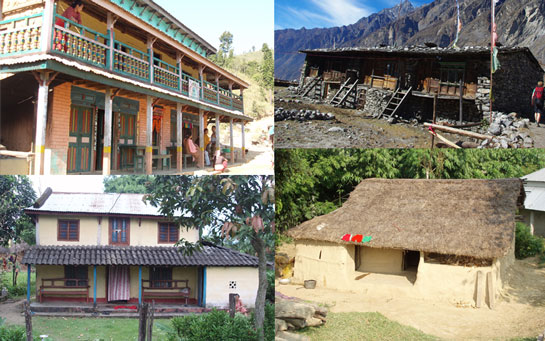 Nepali villages are very close-knit communities. Everybody knows everybody else, their family, and their ancestors. Often the communities are interlinked by marriage too.

The mountainous terrain of Nepal and the lack of roads means that getting around takes time, and access to things like schools or hospitals is very difficult. It’s not uncommon for children to have to spend two hours walking to school, or for hospital to be a two day trek away.

As a result, Nepali villages are largely self-dependent. There is little evidence of the outside world – either very limited shops or none at all, no sign of the government, no police or health-workers. Many have no electricity and few have running water. If a Nepali wants something they normally have to do it themselves.

This separation has resulted in a diverse mass of ethnic groups, languages and cultural practices. Often one village’s practices are different from the next, even though they are only an hours walk apart.

As such, it’s difficult to generalise, but one thing is common: it’s a very tough life.

Find out more above life in a Nepali village:

More about life in a Nepali village

Villages in Nepal are vibrant, noisy, and communal places and the social, economic, and political centres of Nepali life.

Each village is usually made up of a number of different ethnic groups living side by side somewhat harmoniously, and who can trace back their history and relationships within the community for at least several generations.

Often village members are related to each other and to other villages in the region and families often look for marital possibilities for their daughters and sons. Villages are usually spread quite wide and the following graph shows how far villagers must walk to reach amenities:

Houses in the village are usually constructed from local materials according to the weather; in the south where it is hotter houses are made from mud and straw to cool the inhabitants, and in the colder north houses are constructed with stone and tiled roofs.

Nepalese villages are highly communal with a central seating area under a big tree and a veranda in most houses to enable the villages to meet and talk with each other.

Work in the villages is almost entirely agricultural and low paid, which is lucky as shopping facilities are usually sparse except when roaming trades people bring items balanced on their heads and backs. Even if a villager had a money, they would not have anywhere or anything to spend it on!

Those who wish to earn money are forced to leave the village and travel to a city or abroad to somewhere like India or the Middle East. This also has major problems for the community as many poorer areas lose all their men and women except for the old and young.